When the boss of the company for which, we will call Erica, worked for was trying to create rift between her and her immediate superior, by sneaking around and creating misunderstandings, the situation worsened to the point that the manager eventually felt the need to resign from the company. Many similar unethical situations occur every day at most businesses anywhere on the planet.

It is human nature that when dealing with people you’re up against various personality characters – partly innate and partly as a result of the person’s upbringing. In the study of psychology, there are five personality traits which are used to describe human personality. They include openness, conscientiousness, extraversion, agreeableness, and neuroticism.

That said, it’s no wonder why it can seem as a challenge when dealing with some colleagues – in particular if their character differs from yours and their selfish goals are front and center. This applies to all types of organizations/workplaces whether for profit, non-profit, private or public. With the Myers-Briggs personality assessment, one of the most widely used psychological instruments in the world, the outcome can be one of 16 distinct personality types amongst which included are “The Doers” and “The Idealists.”

One reason organizations fail to reach their potential is the overwhelming presence of internal politics.  The organization’s leadership should be held accountable for allowing this to flourish, let alone exist. Likewise, the situation can cause career crisis for those who are victims of this organizational plague.

What are internal/office politics and why do they even exist?

Essentially, politics result when several or most of the employees of an organization are behaving in an awkward way through their attitude, and actions that misalign with the best interests of the organization. As a result, productivity gets stifled, morale drops to low levels, and various close-knit groups are formed ‒ all of which compete with each other in a negative sense. To use the analogy of energy, it’s like several forces pulling in different directions.

Office politics constitute several forms amongst the staff including:

–          Disrespect for colleagues and superiors

According to a recent Inc. magazine article by Janine Popick, at her email company, she identifies 4 “office politicians” that will poison your culture. They are, the bully, the ass-kisser, the information withholder, and the squeaky wheel. You can read about their characteristics in detail here.

Office politics exist in various intensities and for several reasons, though it starts with people ‒ all of whom are of different origin, background, personality type, come to work with personal baggage and have their own agenda. The business lacks cohesiveness amongst its staff and leadership. The blame for this outcome goes squarely to the organization’s management which is either oblivious to the fact or negligent in eradicating it. Therefore, accountability begins at the top of the organization, department or division. Incidentally, politics don’t solely exist in large companies but in mid-size and small enterprises too ‒ though more prevalent in larger companies due to the number of employees and managers.

What initiates it in the first place and subsequently makes it thrive are:

–          Lack of teamwork amongst the staff and management ‒ not everyone is in sync,

–          Negative vibes within the organizational culture, and 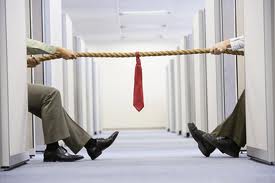 Eradicating it from the status quo

For reasons specified above, internal politics shouldn’t be tolerated. Some would argue it’s a fact of life at work and ought to be regarded as a necessary evil, so just play along with it. Those same people have not understood or concerned about the negative effects it causes an organization.

The solutions that can be implemented to minimize politics require initiative and conscientious effort. It’s also not a onetime effort but an ongoing monitoring process. This is where bold leadership makes an impact.

Finally, encourage openness with an open door policy along with the ability for the staff to discreetly convey their complaints and labor disputes to a third/neutral party, as well as encourage suggestions for improvements.

Consider this typical scenario as an approach to minimizing politics at your company. If you’re in a situation when you meet with one of your staff members, perhaps a direct report, he/she might start criticizing a colleague in subtle ways so as to indirectly give his/her best appearance. This is a sign of political play. The most effective way to put an end to it is by tactfully explaining why it’s not morally correct to speak behind anyone’s back. Rather, urge this person to discuss or assist his/her colleague head-on despite requiring some courage to do so.

In conclusion ‒ confronting the disease head-on with conflict management

Internal politics are a detriment to any organization. It’s up to the leadership to identify and stamp it out through its policy of intolerance. It is, after all, management’s responsibility to monitor the culture, morale and productivity of the staff, otherwise the situation may become too misaligned overwhelmingly affecting the bottom line.

There is no such thing as “ditty” office politics. Its mere existence is adequate to cause strain to the organization and its employees – regardless of stature. It is unethical behavior. If there’s a conflict, stop it in its tracks by going to the source of it. This should be done in person, and if necessary one-on-one in a private setting. Perhaps some coaching along with talk straight may be necessary to discuss how to work well with the other individual and encourage this person to talk to each other.

At the end of the day, office politics is the direct result of a lack of focus and lack of teamwork. Someone has to take responsibility for it and not allow it to thrive, let alone exist. Encourage your staff to work in harmony and keep an eye out for the office politicians. Politics is a human dilemma. If you can’t eliminate it, at east contain it. Consider conflict management in your human resources arsenal.